I always love live-tweeting awards shows with my friends and bonding via the mutual love of tearing down those who are insanely successfully and make more money than most of us will ever dream of.  Hey, whatever makes us feel good.  That said, this was a less-than stellar awards show in terms of fashion, in my opinion.  Now, I know it’s usually a little more casual than the Oscars, but for God’s sake people, please at least look like you weren’t startled out of bed.  I’ll start with my favorite attire of the night:

This is a horrible picture of her gown but when Margot Robbie walked out on the stage to present in this she looked like absolute perfection.  She wore that low cut well.  And I liked the hair with the dress.

I love Olivia Wilde and I know, I know……you think she’s intentionally channeling Angelina Jolie here.  Who cares?  She’s pregnant, elegant and I thought this was stunning on her. 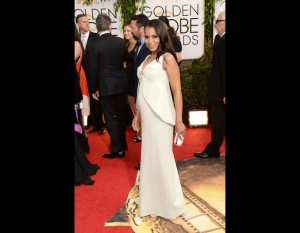 Every single awards show, I love Kerry Washington.  This was a simple way to show off a baby bump.  Pure elegance. 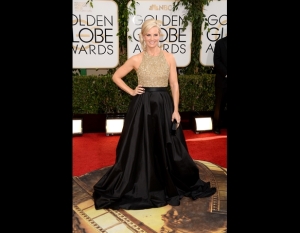 Monica Potter.  I liked this.  I thought she mastered the art of simple yet stunning.  There wasn’t much of this on the red carpet tonight so I found this look refreshing.  A bit of gold, some simple black and perfect hair to go with it.

Sosie Bacon, daughter of Kyra and Kevin looked so elegant and mature in her muted gown.  I thought she deserved a shout out for having such classy taste at a young age.

Julianna Margulies.  She can be hit or miss.  I was on the fence for awhile but I ultimately put her in the “win” category.  It’s elegant and a bit of Old World Hollywood, which is always refreshing to see on the carpet.  And she is just radiantly beautiful no matter what she has on.

Robin Wright.  I know there was a moment during her speech where a little side boob was visible and at times it appeared to be a little loose but she has an incredible body for it and the back was stunning.  Wide open but so attractive on her.  And she just looked radiant and happy.  I like it “a lot”.  Isn’t she radiant in this close-up?

Now for the LOSERS!  Whew!  This was hard to narrow down to less than 25.  So much horrid fashion on the carpet this evening.  It wasn’t so much a lack of taste, though that was certainly present.  It was more like no one cared!  I mean, take Kaley Cuoco……

She seriously looked as if she slept over at Courtney Love’s house and grabbed something off of Courtney’s closet floor after waking up horribly hungover.  Why???

Holla, everyone!  It’s time to get those Valentine’s Day cards if you haven’t yet!  Just a friendly reminder from Drew Barrymore!

No.No.No.  This looked like something that would have been in a blister pack of Barbie clothing in the early 1980’s.  Complete with matching shoes.  And the hair looks like something you would wear for your kid’s soccer game, not an awards show.

I don’t have a photo of the horrid back of Emma Watson’s frock but it looked like something that was more “running of the bulls” and less Golden Globes.  Ole!

Nope, Julia.  You’re classy.  You have style.  You missed the mark here.  It looks as if she was late finishing her shift at Olive Garden (twins to support, you know!) and just slipped a gown on before taking off her white button-up shirt.  I mean, I don’t even understand why someone would design this dress let alone buy it.  I’m torn on her hair.  I like it and yet I think it looks a bit like her husband wanted her to dress up and play teacher.

She’s adorable.  America’s new sweetheart.  Rocking the pixie cut.  Not so much this dress.  It looked like perhaps at the last minute the following conversation took place:

J Law’s dad:  “Awww hon, you look beautiful, but that dress is missing something.”

Another one I don’t understand.

I could handle this so much more if it was ALL the color of red that it is on the bottom.  As it is, it looks like it was designed for someone who couldn’t decide of they are an Alabama fan or an Arkansas fan.  And her boobs are way too small to pull this off.  Lord, Amy annoys me.  And yet she’s a hell of an actress.

I could keep going.  But that’s enough of my snark.  I’m sitting here in ripped jeans and an old Fred Thompson for President sweatshirt so you might take my opinions with a grain of salt.  It did make my night to see Matthew McConaughey win.  Gotta love a man in green velvet.

One thought on “Golden Globe Glamour…….and not.”