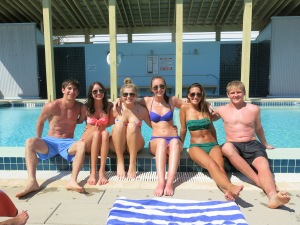 What possesses a sane woman to agree to go on a trip to Florida with 9 teenage (senior) girls and three other mothers?  I’m not sure. Perhaps I’m not sane.  But I CAN say, I’m glad I was possessed.

This trip came right on the heels of taking Ryder to Charleston, SC by myself to check out a college so to say I was a little travel-worn was an understatement.  I basically unpacked, washed the clothes and put them back in the suitcase. (YES, I do laundry!)  We left last Friday afternoon bound for Mobile, where I had chosen to stay the first night since my injured knee retaliates when I drive long distances.  We stopped to eat in Jackson, MS and one of the other moms asked, as we got back in our cars to head for the night’s final stop, “How much further?”  I will never forget the look on their faces as I said, “Just 4 more hours!”  They were not amused.  Soon though we were on the road and completely entertained by following Lil Wayne’s seizures, collapse, coma and resurrection via Twitter.  AND I drove rather fast, according to those trying to keep up with me but we arrived safely a bit UNDER 4 hours.  I plead the 5th on speeding but I now frequently answer when called “Danica”.

The hotel in Mobile was an experience.  The night manager was an interesting fella with a greasy ponytail, an accent that reminded me of a gay man on downers & ZERO personality.  He bordered on just plain rude but I just wanted a room key so I was nice.  I was clearly inconveniencing him though.  Chuck, the kids & I had stayed at this hotel before when we came through Mobile and it was, in 2010, the Radisson Admiral Semmes.  It no longer carries the Radisson brand and although the breakfast in the restaurant was very, very good, it’s gone down a notch. It’s just the generic Admiral Semmes now. We survived.  As I kept saying, all I needed was a clean place to lay my head.

The next morning we headed for “Money Well Spent”, the beach house we had rented in Seagrove Beach, FL.  Yes, that’s one house for all 13 of us.  But it was spacious and comfortable.  Being a veteran of beach house rentals, the first thing I noticed was that it was quite noisy compared to other houses I’ve stayed in.  Footsteps sounded like thunder and then immediately we began noticing things that weren’t working properly.  There was a bit of rain our first couple of days, which wasn’t too annoying until it began to rain on Rachael on her top bunk on the bottom floor of the house.  Not cool.  We dealt with that for most of the trip.  The stove went from 0-350 in about 60 seconds and I CHARRED three loaves of garlic bread.  A chair broke when someone sat on it. The stairway window would NOT close and lock.  It took us a day to figure how to turn the TV on (it took them a day – I was no help!), the microwave was a piece of crap, and the toaster was on the fritz some too.  The icemaker clogged the first or second night and housekeeping left us about 9 towels total after assuring us there were enough for 18 guests, even though we only had 13.  Then on the next to last night, I woke at 3 a.m. to what I thought was the sound of a girl sitting on the bathroom floor (I shared a bath with 5-6 of the girls) eating potato chips.  Who eats potato chips at 3 a.m.?  Well, living with Ryder I can tell you sometimes teenage girls do.  So I was annoyed, but not alarmed.  But then all of a sudden this feeling came over me and I realized it wasn’t potato chips.  It was a mouse.  A BIG mouse.  Couldn’t be a rat because rats know I don’t like them and they stay away.  I thought for a while it was in my new plastic Lilly beach bag so I proceeded to throw stuff at the bag AT 3 A.M. because we all know what a house of 13 women need in the middle of the night is a mouse gone batshit crazy after being tortured by a topless woman in boyshorts who is burning up because the air/heat is either full on or full off, but never just right.  After lying motionless the better part of a half hour listening to this rodent chew I got up the nerve to walk over and nudge the bag, again, because that ALWAYS helps a “giant hiding rodent” situation.  That’s when I realized the creature was in the wall and it sounded much bigger.  Like the size of Garfield the cat-bigger.  I finally did what any woman of this day and age would do and took an anti-anxiety medication and went to bed because it’s just a little mouse anyway, right?  The next morning I shared my story at breakfast and Mary Carol said, “Oh, I saw a huge RAT in front of our house yesterday.  It went down under the porch!”  I don’t think I was ever fully asleep for the remainder of my vacation.  So, we amended the sign for “Money Well Spent”!

Overall, though, the house fit our needs, was spacious, 50 yards from the beach, across the street from two swimming pools, one of which was heated and I had my own room!  It was also near 2-3 other houses of Little Rock girls and boys.  That made it convenient for them to hang out.  I could overlook all that other stuff.  I just think maybe the homeowner doesn’t give it the care and attention we’re used to with the house we usually rent.

On Wednesday, Ryder came up from the beach, laid down on the couch for a nap, & woke up 5 hours later, with her face looking like Phyllis Diller after facelift #5.  It was frightening.  I kinda wanted to take her to the ER that night but due to circumstances beyond my control I was unable to.  She survived but has been in pain ever since.  I took her the next day for a steriod shot, which helped but she still is suffering from rash-like patches and intense burning.  It’s been determined to be a reaction to medication, exacerbated by the sun.  I felt terribly sorry for her because I feel like it ruined her trip.  She had a great attitude and even went out on our last night there.  She donned a plastic unicorn head, but she went out.

There was drama (13 women?  Did I mention that?), there was laughter, there was friendship.  More than once throughout the weekend I saw girls make sacrifices for each other & forgive and forget. They thanked me repeatedly for things I did for them. We ate well, we rode to Seaside and shopped on our bikes, the girls all went out to dinner one night (except Ryder and myself 😦 ), there was a bonfire on the beach, we laid by the pool, I met two friends for meals out, I ran the girls to Chik-Fil-A in Panama City a time or two and we made many, many trips to Publix for groceries.  The water was cold, the wind was a little much, but as always, when I plant my feet on the soil of FL Hwy. 30-A, all my worries disappear.  I could live here.  I hope to live here.  And I miss the girls already. 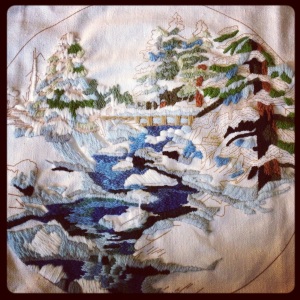 So, I took 4 days off Facebook.  I have to say, I missed the interaction with friends I wouldn’t normally be able to interact with.  BUT, I wasn’t back too long (like 45 seconds) before it was getting on my nerves again.  If I created a “Holy Facebook” would some of you who do nothing but preach the Bible go over there? And perhaps a “Political Facebook” for those of you who like to argue to the point of futility?  I digress.

This is what I did while I was gone.  And these are some things I would have said, had I been on Facebook (in italics):

*I enjoyed some uninterrupted, silent stitching time.  I made progress on my vintage winter crewel kit that reminds me of Keystone, CO, where we spent Christmas this year.

*I got a great new bench for my entryway and assembled what little there was to assemble MYSELF, thank you.

*I had the carpet cleaned.  Guy didn’t do as great of a job as my regular guy so, screw you, Groupon.  Wait, it looks like Groupon IS screwed.

*“Barnes & Noble sales fell this quarter.  No one can blame me for that one.”

*Overheard at our house.  Brooks:  “Moooooom!  Ryder ordered a fake squirrel head on the internet!”

*I ordered a swimsuit but the one I REALLY wanted was out of stock.  Damn you, Garnet Hill shoppers.

*“Know what is more annoying than a reformed smoker?  Someone who doesn’t do Facebook.  That’s right.  Chuck.”

*I watched “The Help” again with Chuck because he had not seen it.  He liked it too.  I love that movie.

*I locked myself out of the house so I went to Chuck’s office to get the key.  By the time I got back, Ryder was home from school and had locked me out again by locking the deadbolt, which I don’t have a key to.  Needless to say, I WOKE her.

*“Let there be peace on Earth.  And let it begin with my kids getting their asses in bed and going to sleep.”

*I had a date night with Chuck at YaYa’s Eurobistro.  I freaking love date nights with my husband.  And he bought me shoes while we waited!

*“Would all the transvaginal mesh victims please come forward so the commercials will freaking end?”

*Commercial: “Do you or a loved one use an IUD for birth control?”  What else would I use it for – a slingshot?

*Spent two and a half hours in a dental chair starting the process of getting two veneers replaced with crowns.  Fun.

*“Donning my bullet proof vest to go to the mall and purchase a bra.”

*I ordered a new slipcovered loveseat for our tiny den.  It hasn’t shipped but when it arrives I’ll be in heaven because I can watch Investigation Discovery while the rest of my family flips between the Razorbacks and something like Worst Cooks in America or Dual Survival.  And before you start in on it being snow white, TALK TO THE HAND.  My friend highly recommends it because it can be washed and bleached.  So, no, I don’t think white is a bad choice.  Hush.

See, YOU DIDN”T MISS MUCH.